Hi, last night we went out to dinner after being, as we thought, stuck in the apartment all day. According to the Cyprus Bus website, the Larnaca Buses were on a one day strike, but as we set of to walk down to Mackenzie Beach to find a restaurant, the first thing we saw was a local bus heading for the airport, this is typical of the misinformation, or total lack of information, on this island. Cyprus is heavily dependent on the tourists, but does nothing to help tourists when they arrive. A good example was on Wednesday, armed with our weekly bus pass, we went to the bus station, asked a bus employee with a clipboard which bus to get for Kiti, he told us the number and also showed us on the board what the time of the bus was, very helpful, we got on the bus and I asked the driver to give us a shout when we arrived in Kiti, this was because the route went beyond the village, he grunted a yes. We came to a village, just a couple of kilometres beyond the airport and, after going round a lot of narrow streets, all the other passengers disembarked, the driver then asked us where we were going, then informed us that he wasn’t going to Kiti due to road closures, why did we get that far before being informed?

Back to last night, we found a seafood restaurant and I ordered fresh boque, a small fish which resembled sardines, Celeste ordered kavourakia, tiny crabs. The meal was served with chips and toasted bread, which turned out to be the tastiest thing, the fish and crabs were totally deficient of flavour, on the whole it was a bad end to a bad day.

Thanks for dropping in, take care. 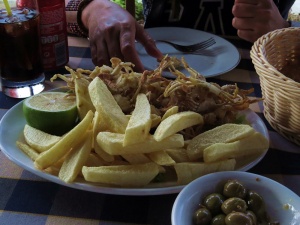 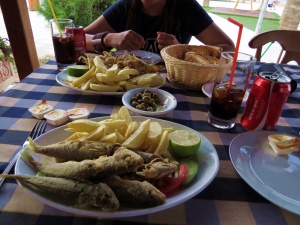 10 thoughts on “Dinner out”

I am new to, but very keen on, photography. I am limited as to where I can go to take photos as I am disabled, the weather also affects my condition, so I just go out when the conditions suit. I have noticed that bloggers pick a blogging name to show the purpose of their blog, I chose my actual name because my blogging purpose is quite varied. The number one thing in my life is to overcome the obstacles in my way to marrying the very sweet lady in my life, Celeste, believe me, we shall get together no matter what they throw at us. Number two is my photography, but I cannot categories that either, I am willing, and eager, to try lots of categories and styles , I just hope my followers enjoy the variety of my posts. Well, that about sums me up.
%d bloggers like this: